Are we living in a virtual reality?

I woke up from a dream a little while ago, wherein I was reading the Tarot cards in the accompany of an old woman. She told me it was time to leave the dream chamber, before we left the room I looked the cards once again for a consciously recall. The cards symbolized that my higher purpose is to share my vision of the world we live in. Before I left the dream room I pushed aside the heavy curtains that blinded the windows, what revealed the outer world… The next moment I woke up in my bedroom…

Who owns the truth?

Suppose that we’re living in a virtual reality designed by Bill Gates and his company, that captures our world in a story which serves their power and wealth. By thinking about it I noticed that you can read ‘Bill’ as a payment for the ‘Gate’ that opens a digital portal to his empire. Until we become conscious of this gateway, we experience a landscape that’s serving their monetary system. A system that is driven by greed and conquer the world by its created scarcity. This consideration could be beyond the bounds of our beliefs of reality, but it is not inconceivable to think about its truth.

Is it all in the name?

It even looks like it’s hidden in the company name ‘Microsoft’ whose computer software can manage the world population on microscale. We all know since school that macrocosms starts from microcosm’s, this is the biological creation of life itself…

Is there a hidden agenda?

The computer system could influence our beliefs for their own prosperity, just like some religions have done in the past. A Gate that opens the portal to experience an artificial reality of life? To improve this artificial reality into biological means is by collecting DNA, with this data they can create their own population to play with. Has the world’s population become a digital means of payment?

Are we a digital currency?

Bill Gates must be called a genius for this digital environment that connects the whole world, but he might have missed the natural principles. His invention can only be sustainable if the system is conducive for all humanity and living things in nature. Each one contributes its value to the whole, when we disrupt this nature rules, we create scarcity and pollution. Nature is structured through abundance. Could it be that we are held hostage in a story that creates an environment for just a view very wealthy people, that can only be manifested by your energy.

Are we running the system?

The digital story is manifesting a collective reality through our attention. By watching television and the use of computers, cellphones, news reporting and social media, we believe the story is real. There must be a war going on for our attention to continue the monetary system that’s broken and hacked by a virus of anxiety. Bill Gates is a genius but… the people who use his computer operating systems, actually possess the real value. The consumers have the power to commute the digital products into Heart based algorithms, with sufficient carrying capacity.

The human life is the quantum computing. If we live life through the Heart we open the Gate to a new portal of harmony and wellbeing to all humanity and living things. Our human Heart intelligence  will save the earth for the next generation. Humanity holds an electric energetic field, also known as the Akashic Field. This field of energy was also known by Nicola Tesla, with his inventions he worked with the frequency of the electromagnetic field. Tesla demonstrated the All Unity and showed the connection between electricity, magnetism and gravity. We are all connected to this field, what else would you think that is breathing us.

What if these reflections could be true, what can we do to reset the system into abundance for the whole humanity and a sustainable world economy? I have thought about it for many years and came to the conclusion that we need to reconnect to ourselves and become aware of… ‘who am I…?’

So I started to meditate and trained the HeartMath breathing method what helped me to reconnect the frequency of love, what brings us in harmony and synchronicity to a field of coherency.

Can we reconnect the dots?

We can use the digital system of Bill his Gates to escape the dark room we’re in right now. The people who starts running the opposite are developing a new energetic wave that bring prosperity and wellbeing to all mankind and living things. The more we awaken from this nightmary, the sooner the system will collapse into the nothing from where it started, just like the fairytales always come back to the situation where they started the adventure for a happy ending. The spirit comes out of the bottle when it’s held captured long enough to give birth to his ideas. It’s the art of allowing to hold still until you know the time has come to open up for this great gift you represent for the world.

Transformation tells us the story of the metaphor from caterpillar to butterfly. I wrote an article about my experience in a world that not seems to see me for who I am, in late 2011. This article was also inspired by a dream I woke up from. The text is also included in the book ‘Ontwaakt BewustZijn’. You can read the article SPONTANEOUS SYNERGY by opening the link, maybe it’s touching your story as well…

From Heart to Heart… 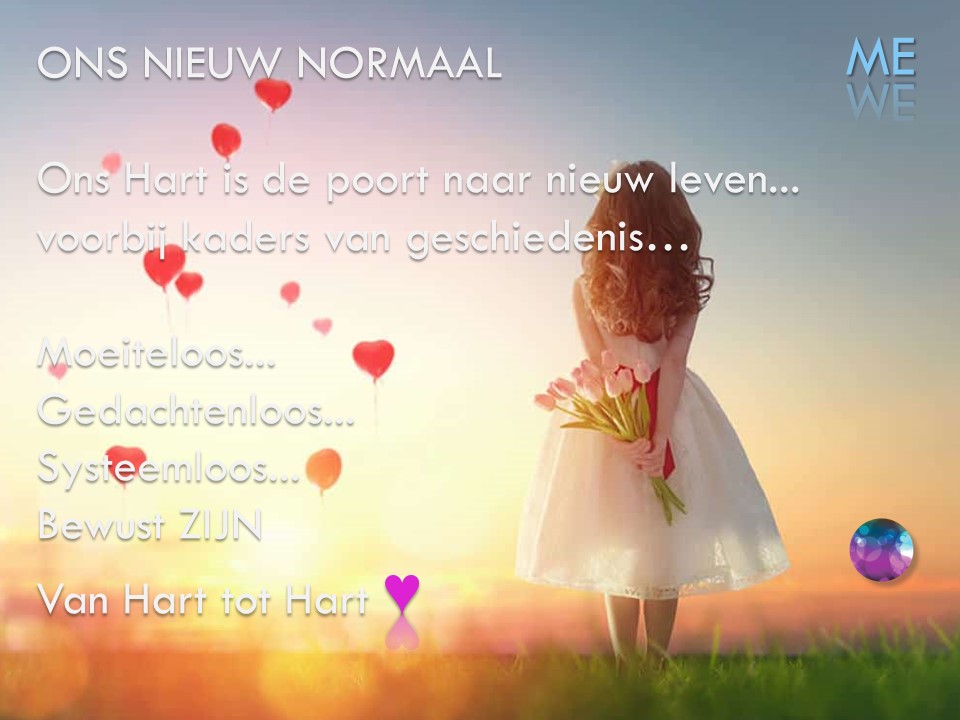